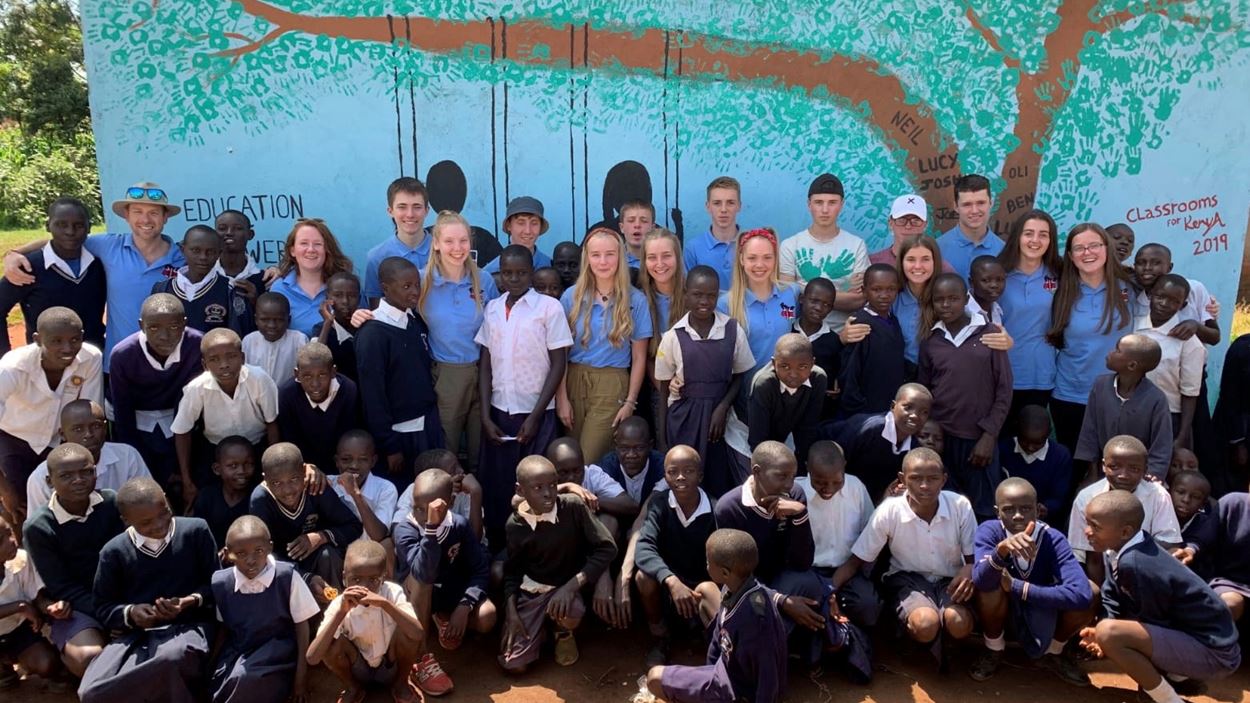 Helen writes the story of her son Luke, diagnosed with Ulcerative colitis at 16. Soon after he was given the opportunity of a school trip to Kenya with the charity 'Classrooms for Kenya'.

My eldest son Luke first became really unwell the day after his GCSE mocks in December 2017. After trips back and forth to Chichester Hospital he was referred to Southampton Children’s Hospital, where he was diagnosed with UC in February 2018 aged 16.

His symptoms settled briefly then in March 2018 he had an acute flare and was admitted to Southampton Children’s Hospital. What followed was three weeks in hospital with three separate admissions as the Mesalazine and then the steroids failed to control his flare. It was horrible to see Luke so unwell and it was a very shocking and sudden introduction to the world of IBD.

Thankfully once he was started on six weekly infusions of Infliximab plus Azathioprine his UC was brought under control. Meanwhile at school, he somehow managed to catch up on his missed work and passed his GCSEs entering the school sixth form in September 2018.

The trip was to take place in July 2019 at the end of his first year of study. It was a trip which he had set his sights on when he first joined the school in year 7.

However, whether it was still possible or wise now, with UC was the big question. Straight away we could see that many aspects of the trip could be problematic:

Luke recognised the issues, but was definite that he wanted to go.

The memories of the three weeks in hospital were still too fresh. However, because it seemed so unfair that UC could deny him an opportunity like this, we decided to explore the issues further.

We spoke to the school first and they were very happy to take Luke so long as his consultant was happy for him to go. They were brilliant, they would try to accommodate any special requirements, he would definitely be well insured and it wouldn’t be a problem if having reserved a place and started paying for the trip, Luke subsequently had to drop out.

We then had an initial chat with his consultant at Southampton Children's Hospital. To Luke’s delight we were informed that provided his condition continued to stay stable and precautions in terms of extra medications were taken with him, he saw no reason why he shouldn’t go.

The yellow fever vaccination is recommended for Kenya, it is a live vaccine and being on immunosuppressant medication meant Luke couldn’t have it. I queried whether not having it was an option, but was told that they give it to all the students going on the Kenya trip. I got the distinct impression that the nurses felt that I was mad to even consider him going.

It was a setback, and really made me question whether we were doing the right thing. However I was conscious that with most things there are risks and whether this risk was sufficiently big to prevent him from going wasn’t clear.

After browsing the internet, I discovered that the Hospital for Tropical Diseases in London offer a consultant led travel clinic appointment for those requiring specialist medical advice and that this service was free on the NHS with a referral from your doctor.

So in February 2019 we met with a Professor of Travel Medicine. He immediately put our minds at rest with accurate statistics which showed the yellow fever risk to be negligible. In his opinion it wasn’t a problem for Luke to travel to Kenya without having the yellow fever inoculation. Malaria tablets and a Hepatitis A jab would be  required. The most significant risk was that a bout of bacterial diarrhoea could result in a UC flare. To safeguard against this an emergency pack consisting of antibiotics and steroids should be taken with him. We asked him whether with Luke’s UC associated issues, was it appropriate for him to go.

The following months were spent fundraising for the school to buy the building materials required to build the three classrooms.

Thankfully Luke’s health remained good. He saw his consultant in Southampton the week before he was due to leave to top up his infliximab, collect his extra medications and he was declared fit to go. He departed for Kenya on 19th July 2019 his bag bulging with the extra medications, letters from the consultants, an excessive amount of SPF50 sunscreen and mosquito repellent, mosquito net and a hoard of snacks.

For me it was a very long three weeks. He was in my mind all the time whilst I wondered how resilient Luke in his immunocompromised state would prove to be. I dreaded receiving a long distance phone call to say he had become unwell.

Three long weeks later he returned. He’d had the most amazing, unforgettable time. He had no bouts of illness and had felt really well the whole time despite many of his classmates having spells of upset stomachs. It was such a relief.

His UC is still always there. He continues to have more tummy aches, more toilet time, more achy joints and more lost appetites than his brother. However, this trip has given me faith that he is much more resilient than I thought. We don’t know what’s round the corner with his UC, but it has shown him that he should continue to ‘go for it’ and try not to let this horrible disease unnecessarily limit his outlook.

These are Luke’s Kenya highlights:

For detailed advice and information on travelling with Crohn's, colitis and IBD, visit IBD Passport.

IBD Passport is a multi award winning nonprofit website that aims to provide comprehensive, practical and reliable information on all aspects of travelling with Crohn's disease or Ulcerative colitis (inflammatory bowel disease or IBD). IBD Passport is a UK registered non-profit charity (registered number: 1171268) with a global reach aimed to support IBD travellers of all nations and regions in the world.