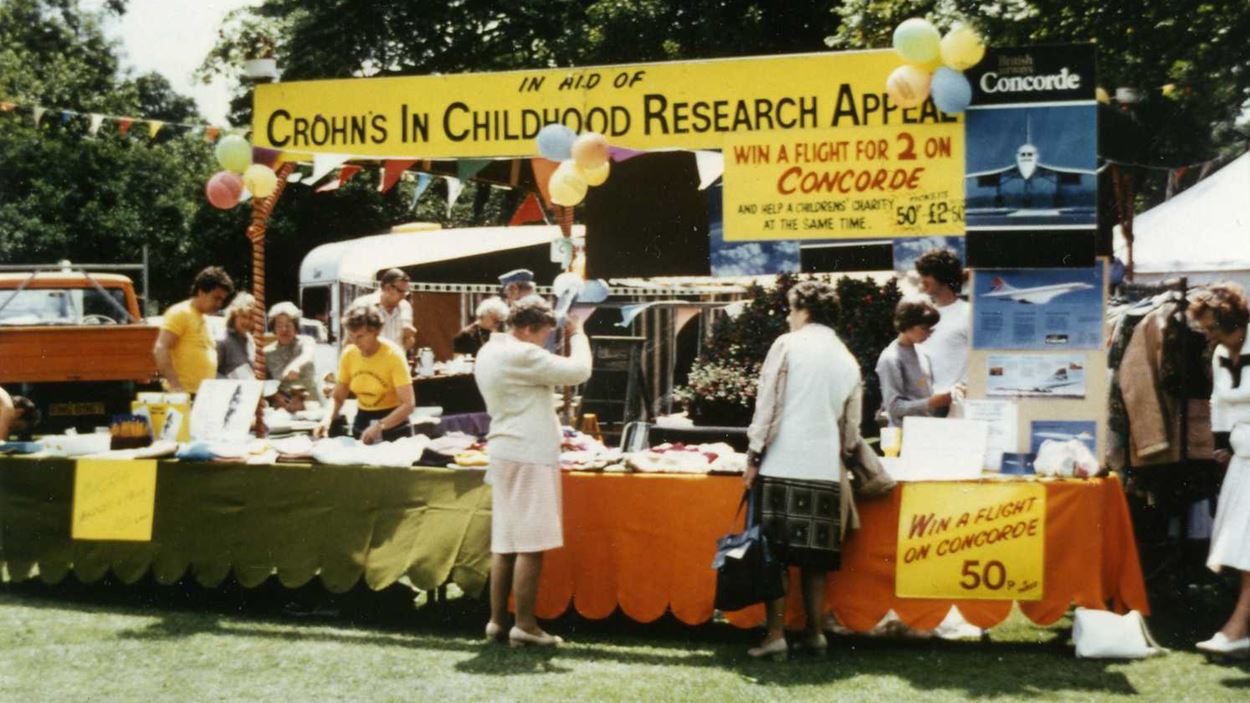 As a small group of parents with young children being treated for Crohn’s by Professor John Walker-Smith at St. Bartholomew’s Hospital, London, we desperately wanted to find out why our children had been affected by a condition which, until then, had only been seen in adults. Steroids and surgery were the only options available but we couldn’t fault the care our children were receiving, so the only practical way we could help was by raising funds. With advice from Professor Walker-Smith, Dr Colin Campbell and the Dean at Bart’s Hospital, we set up the Crohn’s in Childhood Research Appeal.

The setting up of CICRA
To understand all the legalities of setting up a charity I read library reference books and was fortunate that my local library allowed me to take these out at closing time, as long as I promised to get them back before the library opened the following morning. They realised that the only time I had to read was during the night! It is hard to remember those early days, travelling to the Charity Commission offices in London and looking through dusty old books to see whether there was anything already set up for Crohn’s. Having found nothing, we decided to put Crohn’s on the map. A year or so later the National Association for Colitis and Crohn’s Disease (now Crohn’s and Colitis UK) was set up. We liaised closely with them, and still do, but stayed independent fearing that children’s special needs might be lost amongst the thousands of adults with IBD.

We later realised that ‘Appeal’ in our name was not relevant because unfortunately we couldn’t see an end date for CICRA’s need. Reaching out and giving support became very much part of what we did when there was a dramatic increase in children being diagnosed with either Crohn’s or Ulcerative colitis and the name was changed from ‘Appeal’ to ‘Association’. CICRA funded specialist training for young qualified doctors Taking good advice from our mentor and now Life President, Professor Walker-Smith, the trustees set up a research fellowship training scheme, our aim being to help reach a time when all children diagnosed with IBD would be able to see a specialist. Most of the leading specialists treating children with IBD today have come through this scheme and many are now training a future generation of specialists, again with funding from CICRA. How could we have imagined that just a handful of children with a rare condition could increase so much that we now have 27 very busy IBD specialist centres in the UK. Unfortunately, the incidence in children is still increasing, some being diagnosed as babies or toddlers. The need to continue and expand our research programme is vital. we’ve come a long way since 1978.

As a comparatively small national charity we are able to give personal support and understanding to all members of the family - my original thought in 1978 being that if I could prevent just one family going through what we had gone through I would be happy. Our family information days around the UK, supported so well by members of the medical profession, are definitely days when we go home knowing that we have helped.

Opening of the first laboratory in the UK for childhood IBD
In 1982 CICRA set up the first paediatric gastroenterology laboratory in the UK under the guidance of Professor John Walker-Smith. Precious laboratory space had become available in one of the disused office blocks at St. Bartholomew’s Hospital so, with very little funds available, CICRA furnished the lab with second hand equipment bought cheaply from wealthier charities. With CICRA offering what was probably a very small salary for a scientist with such expertise, Professor John Walker-Smith persuaded Professor Tom MacDonald to return to London from America to head up this laboratory. Within the year, Professor McDonald applied for, and was awarded, a prestigious Wellcome Trust fellowship, releasing CICRA’s money for other research. The laboratory became world recognised and major sponsorship from other sources has taken this from strength to strength. It later moved to the Blizard centre in London.

Modulen
As a very early research fellow, Professor Ian Sanderson carried out research that led, nine years later, to Modulen. We know that many children will shudder at the thought of taking this but it has proven to be a very good first line of treatment for children. Those who have met Professor Walker-Smith, Professor Sanderson and Professor MacDonald will know how dedicated they are and with their help, CICRA trustees have made some very wise investments. We thank them all, and other members of the medical profession who have helped over the years, not forgetting the numerous people who have given practical and financial support.

Being diagnosed with IBD in 2018
Hearing that your child has Crohn’s disease or Ulcerative colitis is exactly the same for families today as it was in the seventies - the initial shock, perhaps relief at somebody putting a name to it, but then fear for the future. Fortunately, we have come a long way since 1978. Specialists are able to diagnose IBD earlier and much improved treatments allow better management. However, we still need to do more. If the elusive ‘cure’ still evades the researchers then we hope for a time where long lasting remission is the norm and children can experience all the usual childhood activities, education and social life unimpeded by IBD.